(Click to enlarge)
Sent by Cisne Negro No comments: Enlaces a esta entrada

Young Lovecraft was in the beginning (and still is) a webcomic based on the hilarious childhood of American horror writer H.P. Lovecraft. What if all those horrendous creatures that live in Lovecraft's tales were met him when he was just a child? Our comicstrips are an homage to the Master of Horror Lovecraft, but also a funny way to take a look at his early days as a writer (and why not?), magician and misanthropic boy.

With a burtonesque style, Bart Torres draws the plots by Jose Oliver, which result is a comic that not only Lovecraft's lovers will like but all comicbook readers.
Doy you like striped clothes? Ghouls? Edgar Allan Poe and other fi-de-siecle writers? Tentacles? THIS IS YOUR COMIC.

Young Lovecraft has been released in Spain by Diabolo Publishing with quite success in that country: over 3,000 sold issues of the Volume 1. Soon it will be released in English.
Some links:
Original webpage
Spanish weblog
Spanish wikipedia entry
Add us to Myspace!
Become a fan in Facebook
Sent by Cisne Negro No comments: Enlaces a esta entrada 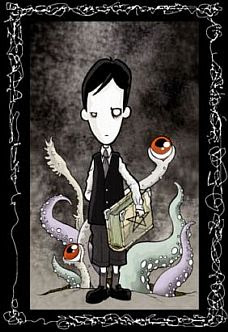 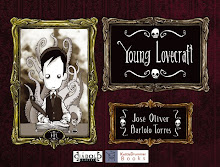 What if all the creatures Lovecraft described were not but bizarre encounters when he was a child? Young Lovecraft is a comicstrip based on the childhood of the American horror writer H.P. Lovecraft. It has been released by KettleDrummer Books.

Do you like Young Lovecraft? Help us to keep going and donate!